J
Written by Jorge Sevillano
Updated over a week ago

This article presents an overview of the Orca Navigation System, the individual pieces of the system, and how this connects to your boat. 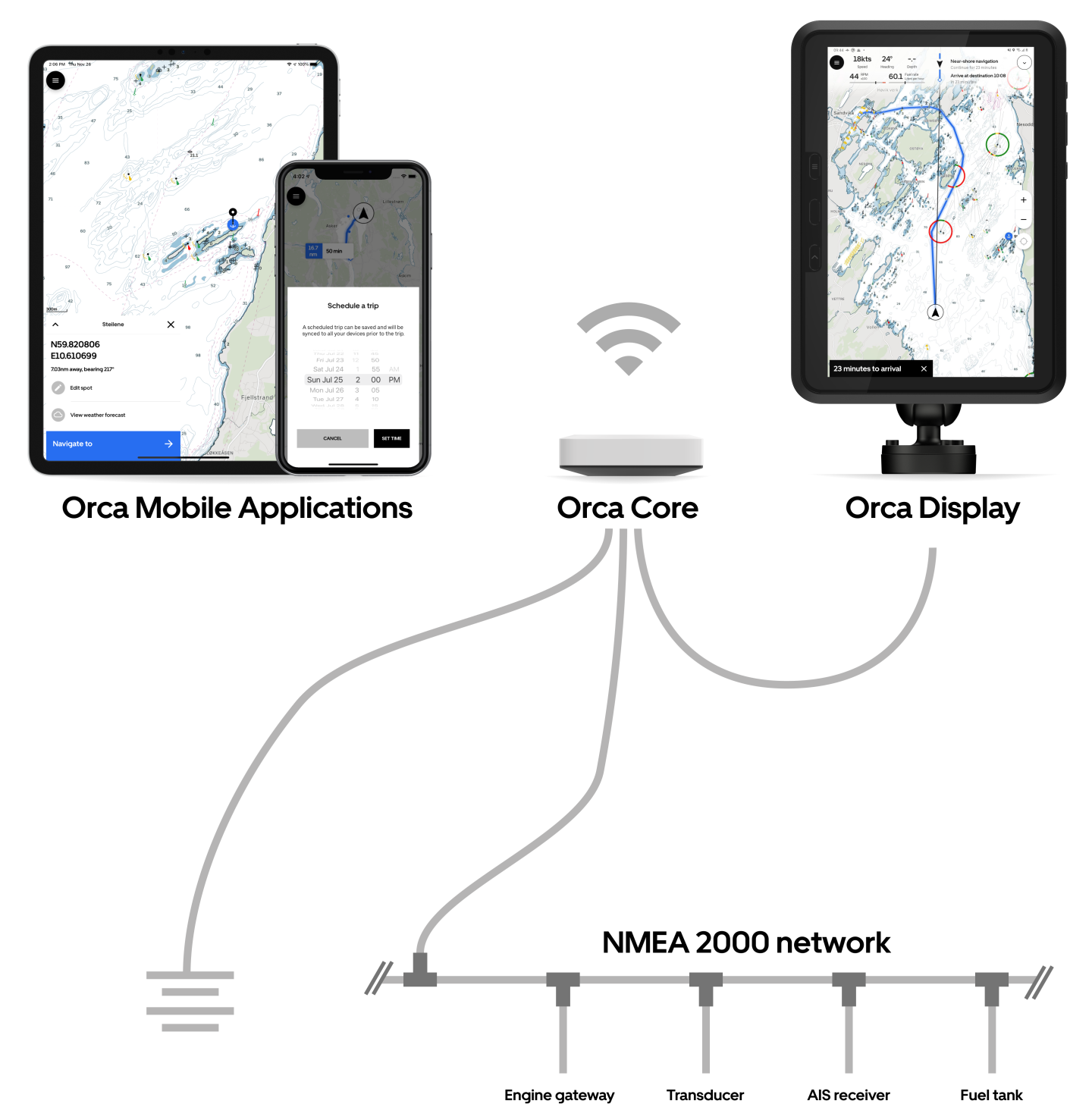 The Orca Navigation system consists of:

This device is the heart of the Orca Navigation system. It has three primary purposes.

The Core contains a 9-axis inertial motion unit, compass, and 10Hz GNSS receiver. This allows the Orca Core to determine your boat’s location and motion with high accuracy and update rate.

The Core connects physically to your NMEA 2000 backbone via a micro-C connector. NMEA 2000 is a modern communication network for boats. It allows devices from different manufacturers to communicate with each other.

With this NMEA 2000 connection, the Orca Core gets access to all information on your boat's network. For instance, you can view depth information from an Airmar transducer, engine and fuel information from a Volvo Penta engine gateway, and AIS targets from a DigitalYacht AIS receiver.

The NMEA 2000 connection is bi-directional, meaning that the Orca Core also shares location, heading, and boat orientation with the other devices on the network. The Core can also use this connection to control NMEA 2000-based autopilots.

The Orca Core will share its location, heading and orientation via NMEA 2000 regardless of if any Orca Displays or Mobile Applications are connected. Because of this, the Orca Core can effectively replace the need for traditional NMEA 2000 GPS and compass devices – providing location and heading data for your VHF, autopilot, and similar devices.

The Orca Core broadcasts information from the NMEA 2000 network and its built-in sensors wirelessly to the Orca Display and Orca Mobile Applications. It means that all your displays have access to the same rich navigation data – from depth to fuel and AIS targets.

The Core receives power via your boat's DC power supply with a draw of roughly 200mA. Typically it is connected on the same circuit as your other instruments.

When docked, the display can be used hands-free, just as a traditional chartplotter.

The docking arm provides charge to the display’s built-in 7600 mAh battery. Power to the Charging Mount is provided by a cable that connects to the Orca Core. Should you need to use the display on the move, undock it with the push of a button, and bring it with you. The large battery provides around 8 hours of active navigation while undocked.

While either docked or on the move, the Orca Display receives navigation data, such as location, heading, depth, AIS, and fuel information wirelessly from the Orca Core.

This means that the display is fully connected to your NMEA 2000 network as long as it is within the wireless range of your Orca Core.

Should the Orca Display lose connection with the Orca Core, the Display will notify you and fall back to using its built-in GPS and compass.

The Orca Display runs a purpose-built Android OS flavor for marine navigation. You also have the opinion to eject from this custom Android OS to run regular Android with all Google services – including the Play Store – so you can download and use your favorite apps on the Orca Display.

The mobile applications are built for iOS and Android phones and tablets. The Orca Mobile Applications can act as your primary navigation display, or as a seamless extension of your Orca Display.

With the Orca Mobile Applications, your personal tablets and phones can connect to the Orca Core wirelessly and act as fully functional marine navigation displays.

Once connected to an Orca Core, the Orca Mobile Applications receives NMEA 2000 navigation data such as boat heading, AIS, depth, and fuel information – and displays this information just like a fully-featured chartplotter.

The Orca Mobile Applications automatically synchronize routes, trips, and other data via the internet. Charts can be downloaded for offline use, just like on the Orca Display.

To use the Orca Mobile Applications, you will need to purchase an Orca Core or the Orca Display Kit. We do not have any immediate plans to offer a standalone version of the mobile applications.

The Orca Cloud Services ties your experience together.

The Orca Cloud distributes chart updates and ensures that your routes, trips, and spots are synchronized across all your devices. It also provides advanced weather forecasts that are tailored to mariners along with automatic routing.

The Orca Cloud Services stores and processes the data that is present on your boat’s NMEA 2000 network.

With this data, the Orca Cloud Services automatically creates a logbook of your trips. Depending on the NMEA 2000 data available, the Orca Cloud can provide insight into fuel consumption and efficiency, engine analytics, and early warning indicators of potential errors.

The Cloud Service analyzes boat travel patterns to create recommendations for port entries and other areas that require attentive navigation.

This was an overview of the system. Continue reading this digital booklet for more information about how each part of the system works. Should you have any questions, feedback, don’t hesitate to reach out at hello@getorca.com.

Curious to see how you install your Orca? Read up the installation guide.

Did this answer your question?